A Prayer for Wisdom

From “A Common Prayer”

(We start our morning Gathering Circle every day with this prayer.)

Let us pray for wisdom. Let us pause from thinking and empty our mind. Let us stop the noise. In the silence let us listen to our heart; The heart which is buried alive. Let us be still and wait and listen carefully: A sound from the deep, from below. A faint cry. A weak tapping. Distant muffled feelings from within. The cry for help. We shall rescue the entombed heart. We shall bring it to the surface, to the light and the air. We shall nurse it and listen respectfully to its story… the heart’s story of pain and suffocation, of darkness and yearning. We shall help our feelings to live in the sun. Together again we shall find relief and joy. 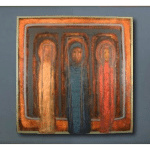 The painting hanging above the altar is by a Maine artist, Peter Bals, who lives and creates in Westbrook, Maine. It is titled “The Three Marys” after the women who tradition names as the first to meet Jesus after the resurrection: Mary Magdalene, Mary the mother of James, Mary Clopas (or Salome). Peter however, wishes those who come here, to view the painting as they wish. Some see it as three women emerging from captivity, others see the images are of the three Abrahamic religions or the Trinity.

Sophia is the ancient Greek word for Wisdom,
used to name the feminine Spirit of God.
In the spirit of Sophia, may you find peace in this place. 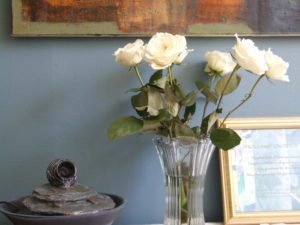 Our beautiful meditation room is dedicated to the Daughters of Wisdom, The Sisters of Charity of St. Hyacinthe and Greenfire Retreat, to honor the women of those communities who have supported and empowered women in untold ways. We stand on their shoulders.

The Daughters of Wisdom is a Roman Catholic Religious community, founded in France at the turn of the 18th century. The Sisters work around the world incarnating Wisdom’s love for others through service to the poor and marginalized, especially women and children. The Community envisioned this center in 1999 with Sr. Mona Guerette, Sr. Irene Arsenault, Sr. Maureen Hurley as founding leadership. In 2008 the sisters found they were unable to continue, and closed the doors in June of 2008. A group of local women formed to keep the center open, and raised funds to do so. The Daughters of Wisdom supported the effort and remain an ongoing contributor.

The Sisters of Charity of St. Hyacinthe, another Roman Catholic religious community, was founded by four Grey Nuns of Montreal in1840. The order had a substantial presence in Lewiston, begun by Sr. Alphonsine Cote, Sr. Adeline Leblanc, Sr. Rosalie Galipeau who came from Canada in 1878. They opened many institutions in this community for the benefit of the needy including an orphanage for boys known as the Healy Asylum that was the original purpose of the building in which this center now resides. They also founded St. Mary’s Hospital and the Marcotte Home. The Sisters of Charity of St. Hyacinthe have contributed significantly to our support.

Greenfire was a retreat center located in Tenants Harbor that was a place of sanctuary for women, especially those in inner city ministries. The founding women, Connie Chandler Ward, Rosanna Kazanjian, & Judith Carpenter , offered retreat space and circle conversations from 1991- 2008. Over the years an annual average of 300 women stayed overnight at Greenfire. Uncounted others visited for programs and circle conversations. Greenfire’s remaining funds upon closure were donated to The Center for Wisdom’s Women.

We gather in Sophia’s Room at 9:15 every morning in a contemplative circle. We ring a Tibetan chime and recite a prayer for wisdom, then leave silence during which those who wish to do so can share a concern or a thanks giving in whatever way is their own custom. When the sharing comes to a close, we often sing a simple chant, and close with a prayer from our collection of prayers for women. It is a gentle way to start the day.  Anyone is welcome to join us. The room is also available to anyone during the day who needs a place to sit quietly, or often women go there for a time of one-to-one conversation and support;