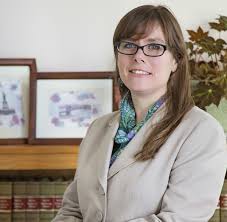 Joined 2019
Mara King is a partner at Andrucki & King in Lewiston, Maine. She received her J.D from the University of Maine School of Law in 2007. Mara’s areas of practice include Divorce, Parental Rights and Responsibilities, Guardianship of Minors, Adoption, Protection from Abuse, Qualified Domestic Relations Orders and in addition to other areas relating to domestic disputes. She is a rostered Guardian ad Litem.  Mara has been a member of the Maine State Bar Association and the Androscoggin County Bar Association since 2007.

Mara grew up in Bangor, Maine. In 1994, she graduated from Wheaton College in Massachusetts. Prior to working in the legal field, she worked in the political and non-profit sectors.  Mara lives in Androscoggin County with her husband and children.